Our Trip to Coimbatore by Jerry

Our trip to Coimbatore - as narrated by Jerry Garrett

Hey, guys, it's me Jerry the junior of the Garretts. I am going to tell you about my trip to Coimbatore.

I woke up at 4:00. Then brushed and took a bath. After that I dressed. Ramalingam uncle came and picked us in his car, the Maruti Suzuki Dzire. He dropped us at Mohali International Airport. It took at least 45 minutes.

We took a trolley, kept our bags on it and walked inside. But first, we showed all our ID cards to the policeman. At the airport we did all our security checks like X-ray, suitcase drop, and the scan. Then we took rest.

Then it was the boarding time. So we went to the line. Then we went inside the INDIGO airplane. First, they did all the announcements. They told the flight was for 1 hour. After 1 hour we landed in Delhi.

After we reached we went upstairs to wake up Juvin. After sometime, he started playing with us. So much we liked. And it was a lucky day for us as he had lego, our favourite kind of toy. We liked him so much. He becomes my best best best friend. After some time of playing, we gave Juvin, Ferro Rocher. Then we started playing again.

That night my father went out for dinner with Gnanasekar uncle, Sunder uncle and other people. We ate at home.

The next day we booked another Ola cab, the Chevrolet sail. We went to my mother's pastor's house. We went to our pastor's mother, father and brother. Then after that we went to Bible Center. My brother got adventure Bible, I got NKJV Bible, my mother got a Tamil Bible.

After lunch, we had to go to a resort named celebrity. It took 1 hour to reach the resort. After we reached the resort, we went to the office. We asked what is our room number? They gave us the key, and told your room number is 103. We went to our room and kept our suitcases.

After that, we went to meet my father's old college friends. I went with my father. I met David Saul Singh uncle and lots of other people.

Then the next day we went to KITS - Karunya Institute of Technology and Science. My father, Joseph gave a message. We went to Karunya by the Karunya bus. 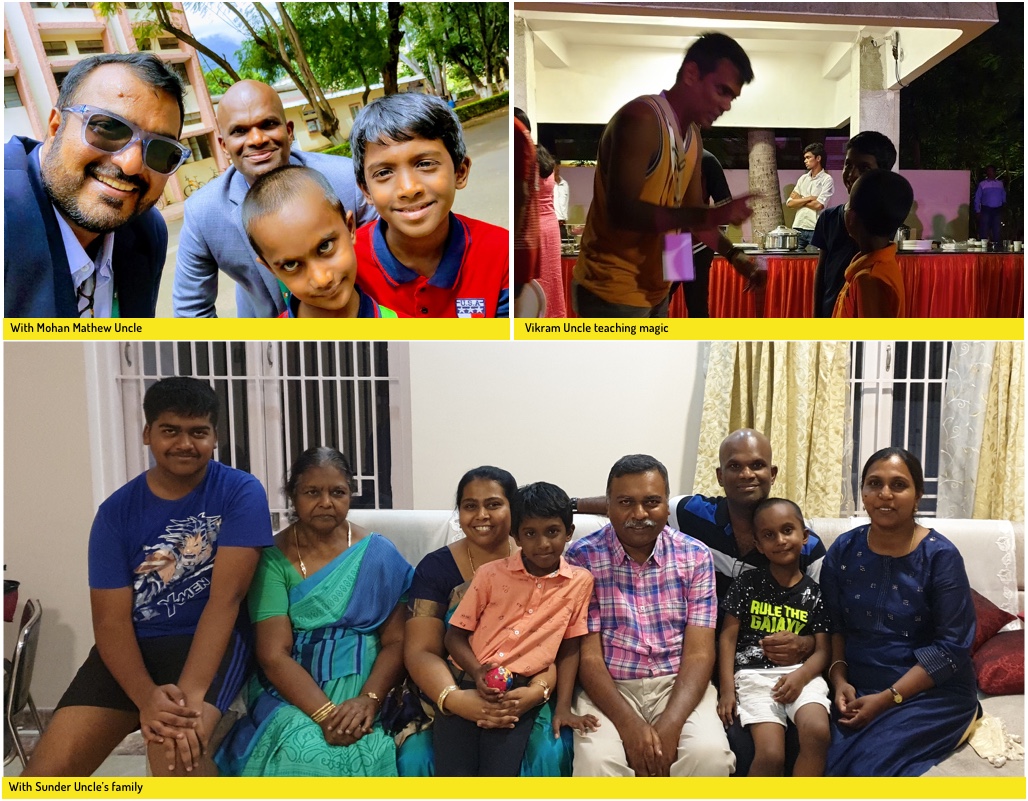 After that we met everybody at the hall. Then we went to eat lunch in Karunya. First we accidentally went to a building called Jerry. We ate in the international mess. First I thought it is a joke, because mess means dirty. I ate roti, gulab jamun and Ice cream. I ate 2 ice creams.

After lunch we went back to the resort in Sunder uncle's car. Those days Vikram uncle taught us magic with cards. We loved it. He taught us mind reading also. Then we went to our room and took rest. Then we went for dinner. After that we brushed our teeth and went to bed.

The next day my father and Sunder uncle went to pickup Jebaraj uncle. That day was thanksgiving day. Jebaraj uncle gave the message. I got lots of friends in Karunya. I will write my best friends list at last. That day David Saul Singh uncle’s wife gave us chocolate. Then we called our car, the chevrolt sail.

We went to Juvin”s house. It took at least 1 hour to reach his house. After we reached home, we played with Juvin.

Next day Joshuva uncle tried to wake up Juvin for school, he didn’t wake up. I had an idea to wake him up. I told Juvin to wake up, we will play and then we will go. He woke up, he brushed. Then we played for sometime. Then it was time to get ready to go to the airport. We called our car the Chevrolet sail. We went to the airport. It took 45 minutes to reach the airport. Juvin was crying so much because he liked us so much.

We went inside the airport. We did our security checks and it was the plane time to Delhi. We boarded inside the plane. They gave us food. I took panner tikka sandwich and del monte mixed fruit juice. After sometime we landed in Delhi. It was a windy and rainy day. We went to the taxi point. We took pre-paid taxi but there was a problem. The driver told to my father, for two suitcases it is more than 400 rupees. But my father asked in the counter and confirmed it is only 400 rupees. We managed to go to the railway station. After we reached, a man came. He told to put the suitcases in his head. After we reached the point he asked 100 rupees. We gave him 100 rupees.

Our train came for Delhi to Chandigarh. We got inside the train. They were saying: attention all passengers, we are going to depart from Delhi. There was a screen showing thank you for choosing Indian Railways. They gave us food - lemonade juice, ready made sandwich, almond slightly slated and Himalayan salt carmel popcorn. After food we were full. They told we are getting near Chandigarh railway station. Ramalingam Uncle was waiting for us with his car. We took our suitcases and kept in the car and came back to our home - Home sweet home.

(Father's Note: Jerry writes everything in lower case and without punctuation. I corrected only those and tried to keep everything else as original as he wrote.)